0
was successfully added to your cart.
Press enter to begin your search

Google Ads – Everything Starts with a Search

When today’s consumers want to know, do or buy something, using Search has become second nature. Whether it’s who was the first person in space, how to bake banana bread or what camera is best for their needs & budget – search is the first touchpoint we turn to.

Google Ads is a tool which only works if we recognise that while there are two variables – the question & the answer – there is only one job – and that’s to connect them together in the quickest and simplest way.

Despite Seach being the facilitator between demand & supply, the market communicates the value of these services to consumers & businesses in different ways.

The role of one, doesn’t make sense without acknowledging the other.
And we all are first and foremost, inherently consumers of the digital world.

So by neglecting the mutual role & relationship between business & customer in our communication, it creates a natural bias for the consumer-mindset with all of us & an unintuitive comprehension for business managers and their role/opportunity in these digital spaces.

A unified platform for consumer & business communications must be clearly aligned, allowing both consumers & businesses to identify themselves within the relationship depending on the hat they’re wearing.

Google is synonymous with search, which naturally positions us as the consumers taking to Google to answer our questions or lead or thinking.

However, this presents the misconception that Google is the product.
Google is the means for discovering the right product (your business) for you (the consumer) at the right moment (particular to their personal circumstance).

The customer is the champion, the business is their companion, Search is their tool.

Clearly articulating the roles is a key challenge, but in the past, the market has practically demonstrated these roles through simplistic, functional examples – businesses remedying negative moments for everyday people (eg. emergency bike repairs or cleaning services), rather than businesses helping inspire positive events for everyday people.
Making for cognitive, but a rather dull narrative.

The magic of a simple idea, combined with your business being found first on Google, is that it can make for all kinds of charming (and unexpected) results. 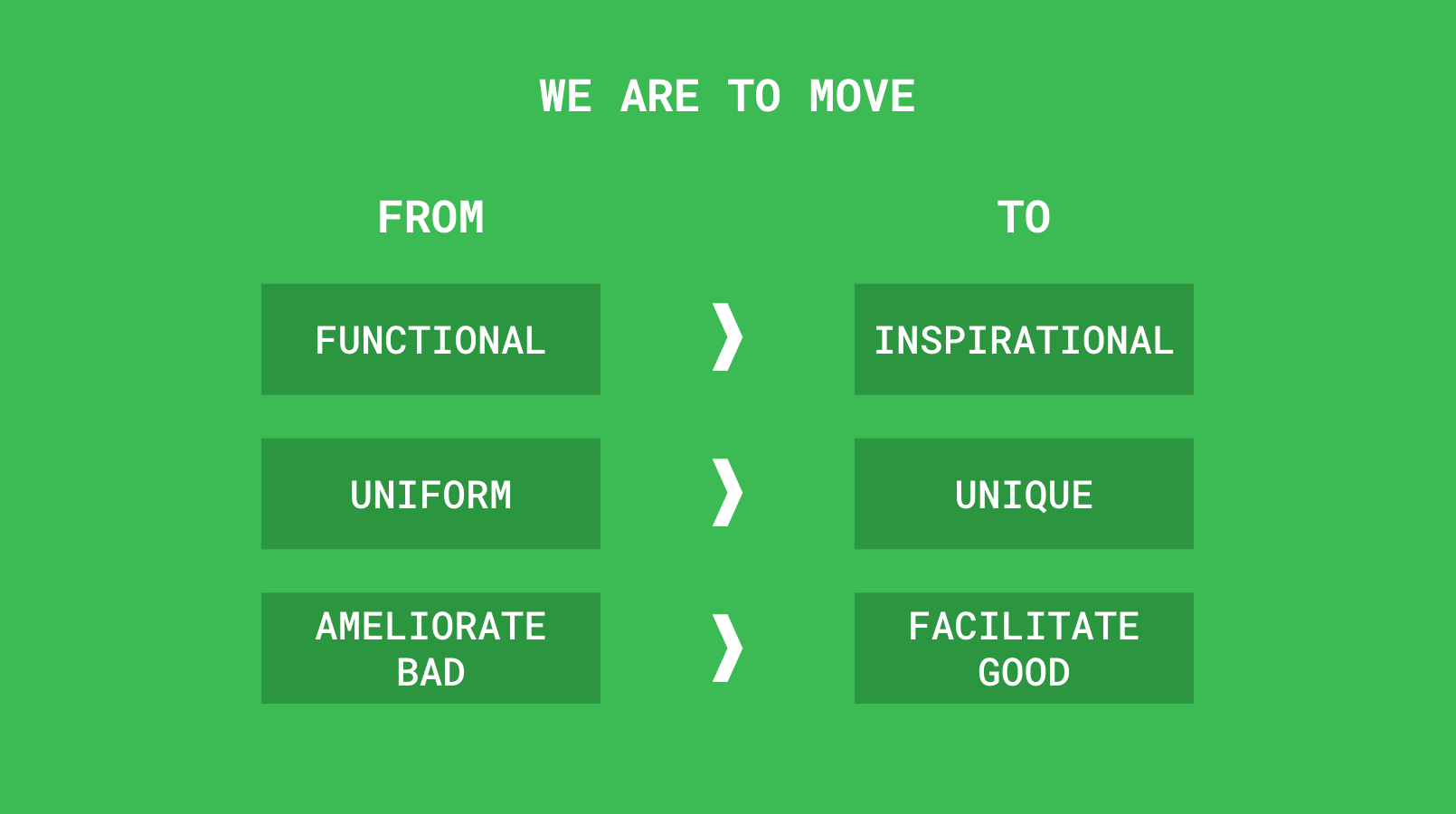 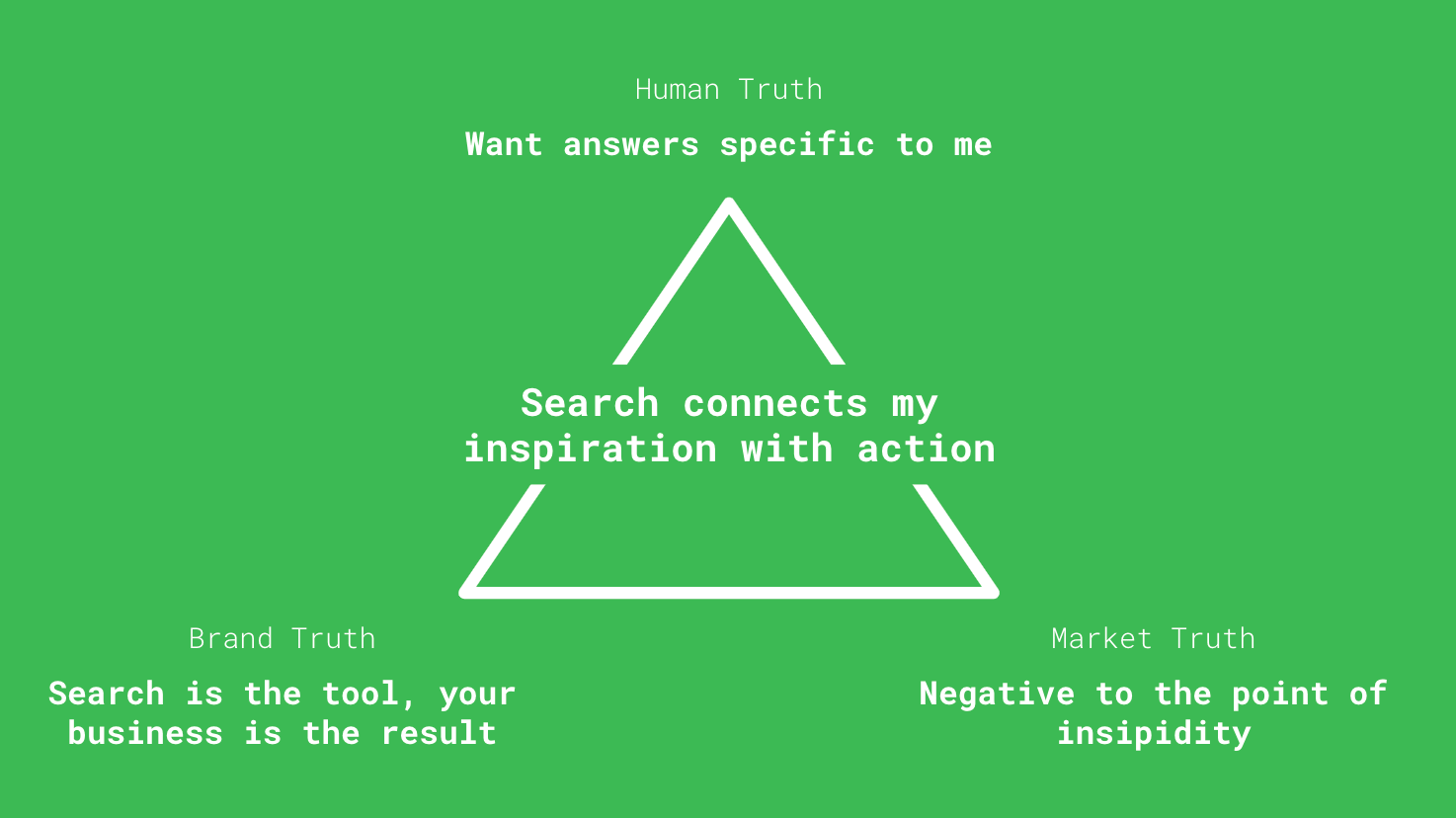 Search connects my inspiration with action

Businesses are the companions behind the champion

Everything starts with a search

To communicate this, we had to identify the three principal consumer mindsets & obstacles along the journey and build a coherent content strategy across these points to meet our objectives. 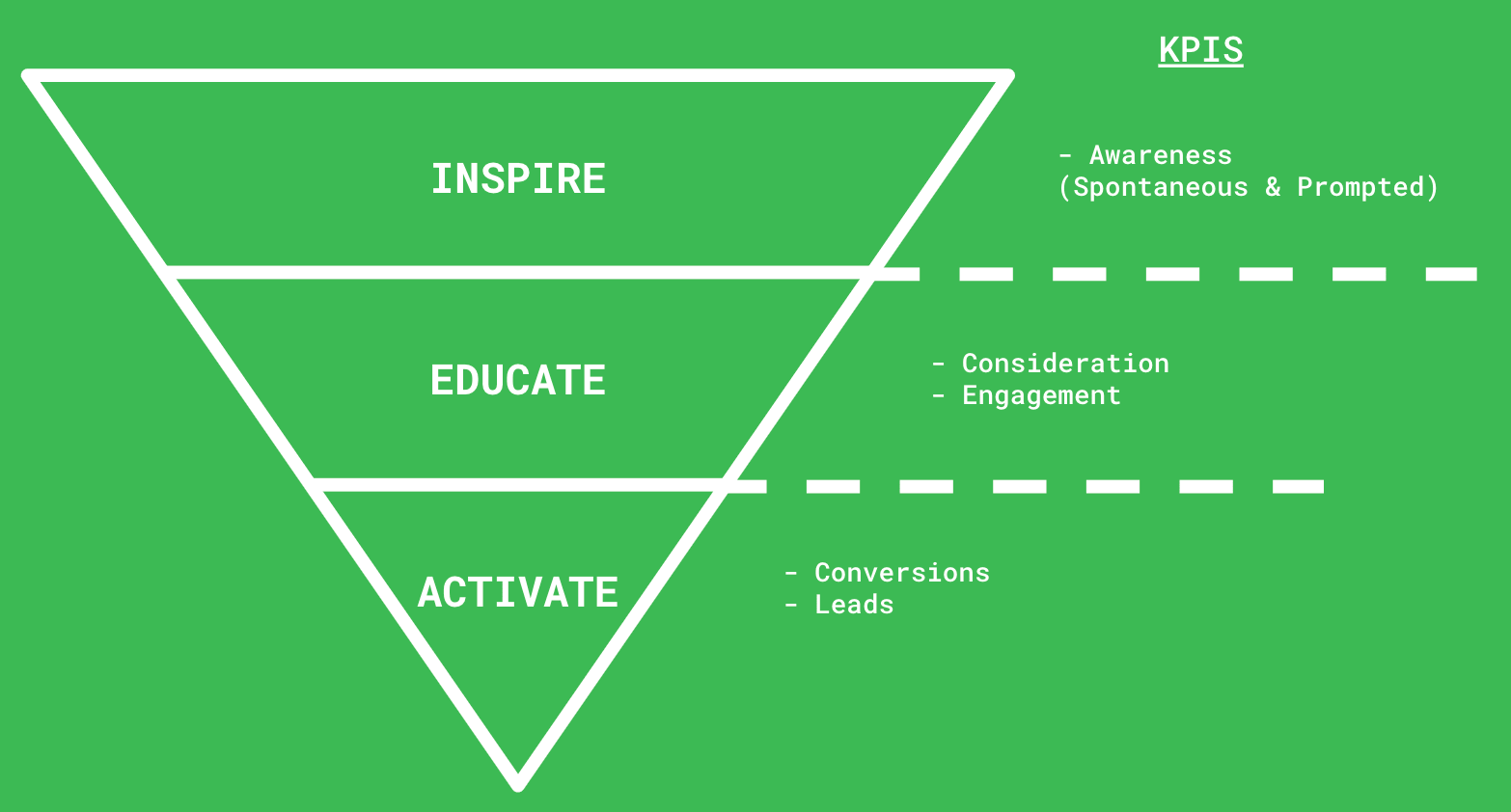 Madcap inventor-YouTuber, Colin Furze, dreamed up a drivable hot tub called The Spa Car, and then created it with products he found through Google advertisers.

He hacked a convertible to make it watertight, flooded it, installed leaf blowers to power the bubble jets, a working barbecue in the boot, and then used an unhealthy amount of foam bath to turn his car into a bubbling, smoking, wet and wild ride…

Colin’s efforts were to ultimately deliver Google’s new advert, however, Colin being an avid YouTuber, the behind the scenes, finding business products, the building process & testing was all documented for the world to be inspired to the maximum madness! 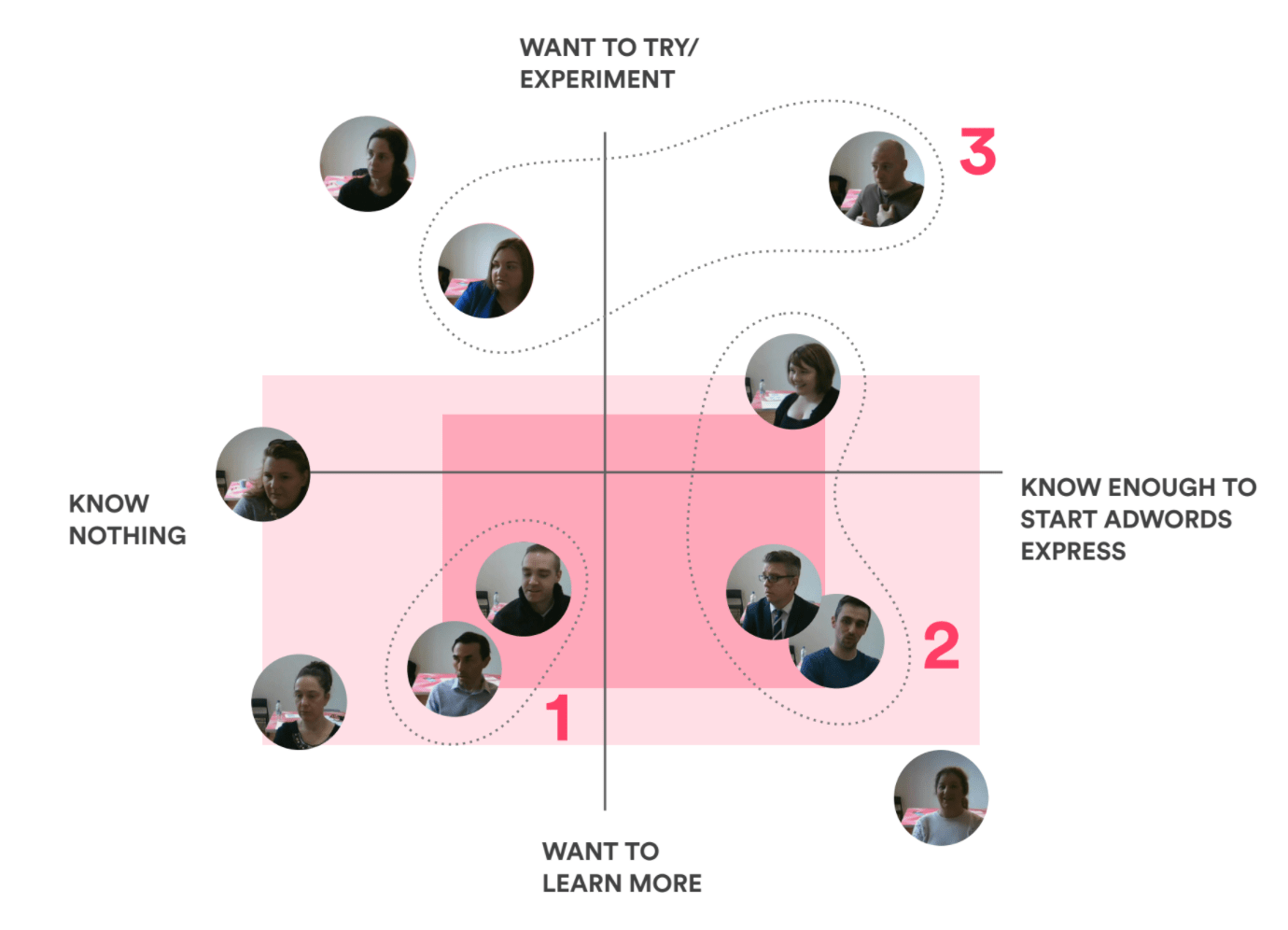 Two principal consumer mindsets emerged from our research requiring educational material and a dedicated workstream to tackle each of these: 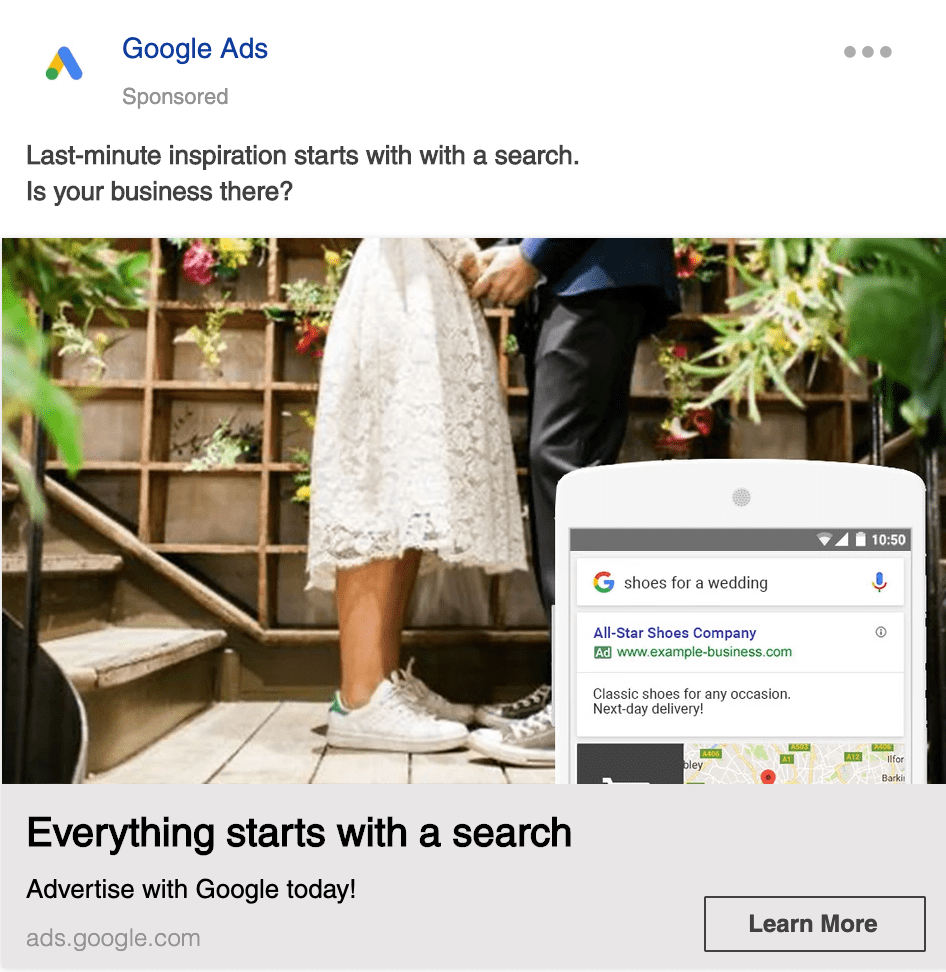 As a leader of the digital world, Google has the responsibility to not just grow their business, but the category itself. Basic understanding of online marketing is the most challenging obstacle preventing business take to the internet as a solution, yet all too often we exclude so many by complicating the process with foreign jargon, interfaces, optimizations and the mysterious logic of how digital targeting works.

Businesses’ initial curiosity in online marketing solutions should be quickly rewarded by showing similar business-types profiting from their experience using Google Business Solutions in an approachable but formal delivery – supported by Google’s credibility. Authentic social proofing & recognizable commonalities in which the business can identify themselves helps reinforce the success & capability of a business taking a competitive edge when using Google Ads. 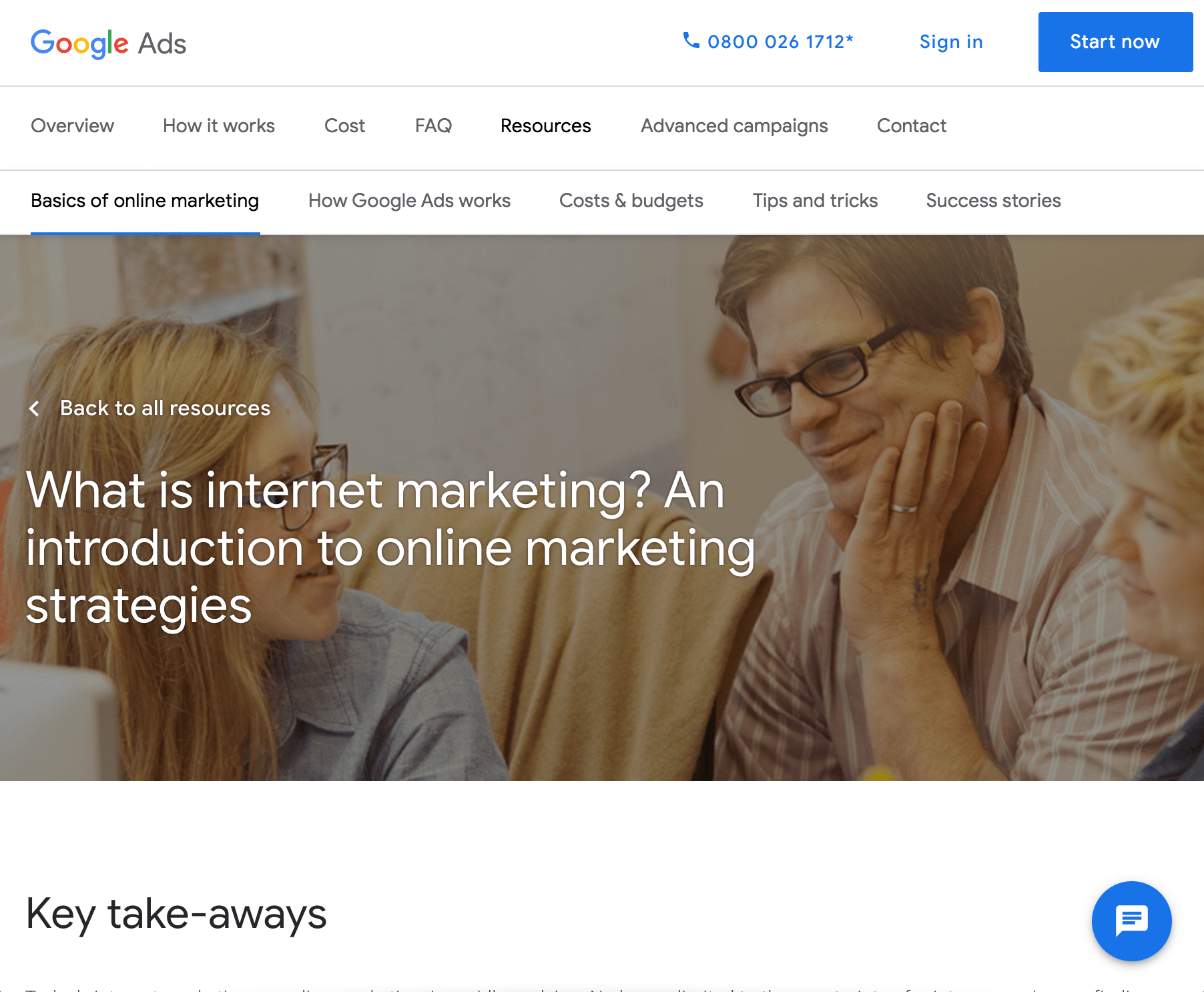 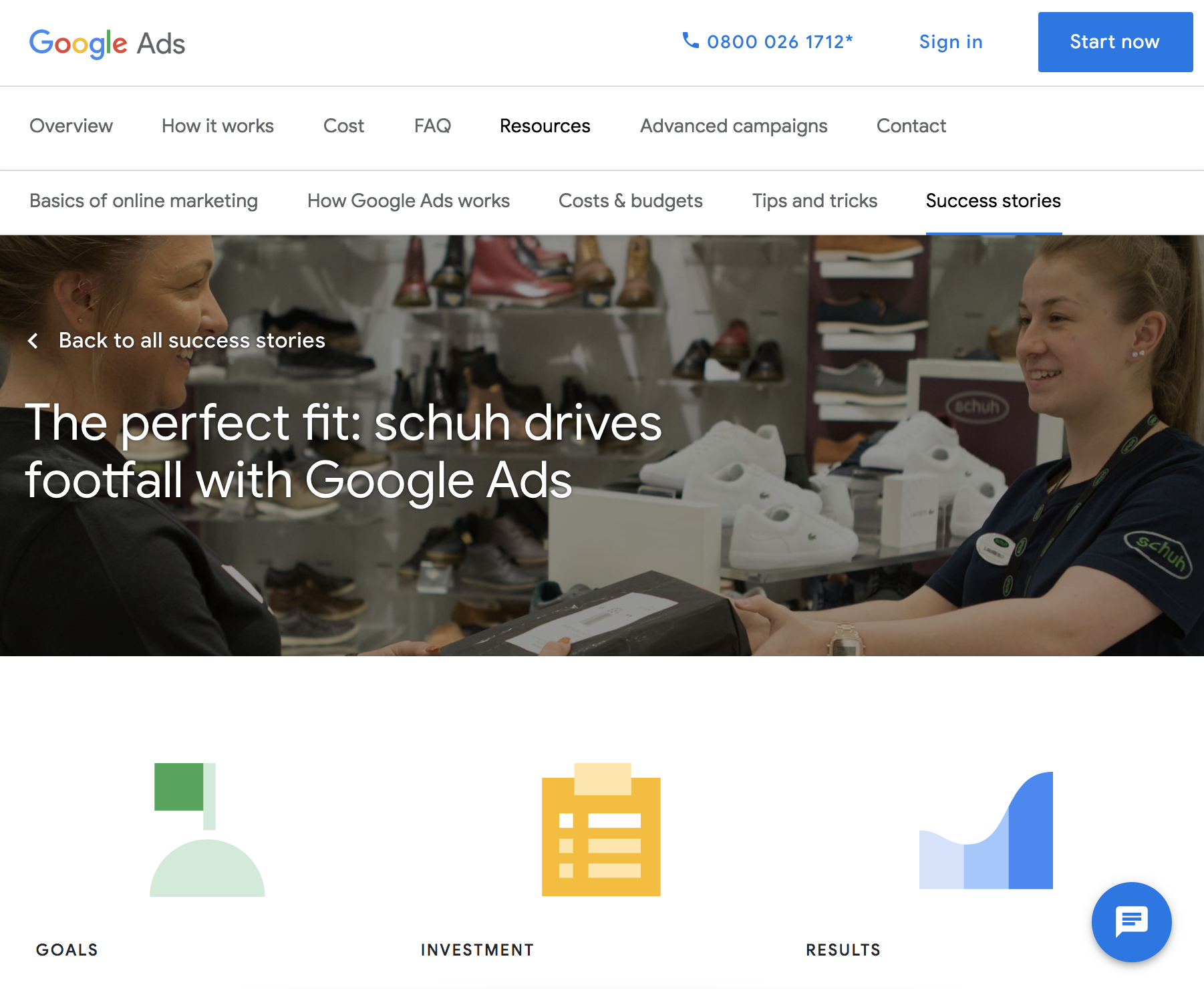 Beyond helping build familiarity with online marketing jargon, filtering the Google Ads UI/toolsets (including the wider Google Business Tools ecosystem) further up the journey to preface the login/sign-up stage aquatinted users & allowed for experimentation in efforts to mitigate hesitance when businesses eventually commit to ad spend later in the journey.

Extracting specific signals & the unique business needs about these high-value customers allowed us to not only traffic them to the more pertinent resources but also allowed us to build a more distinguished profile – differentiating our message between the decision-makers & end-users –funneling them to a qualified conversion-point, enabling us to retarget & communicate to them more effectively. 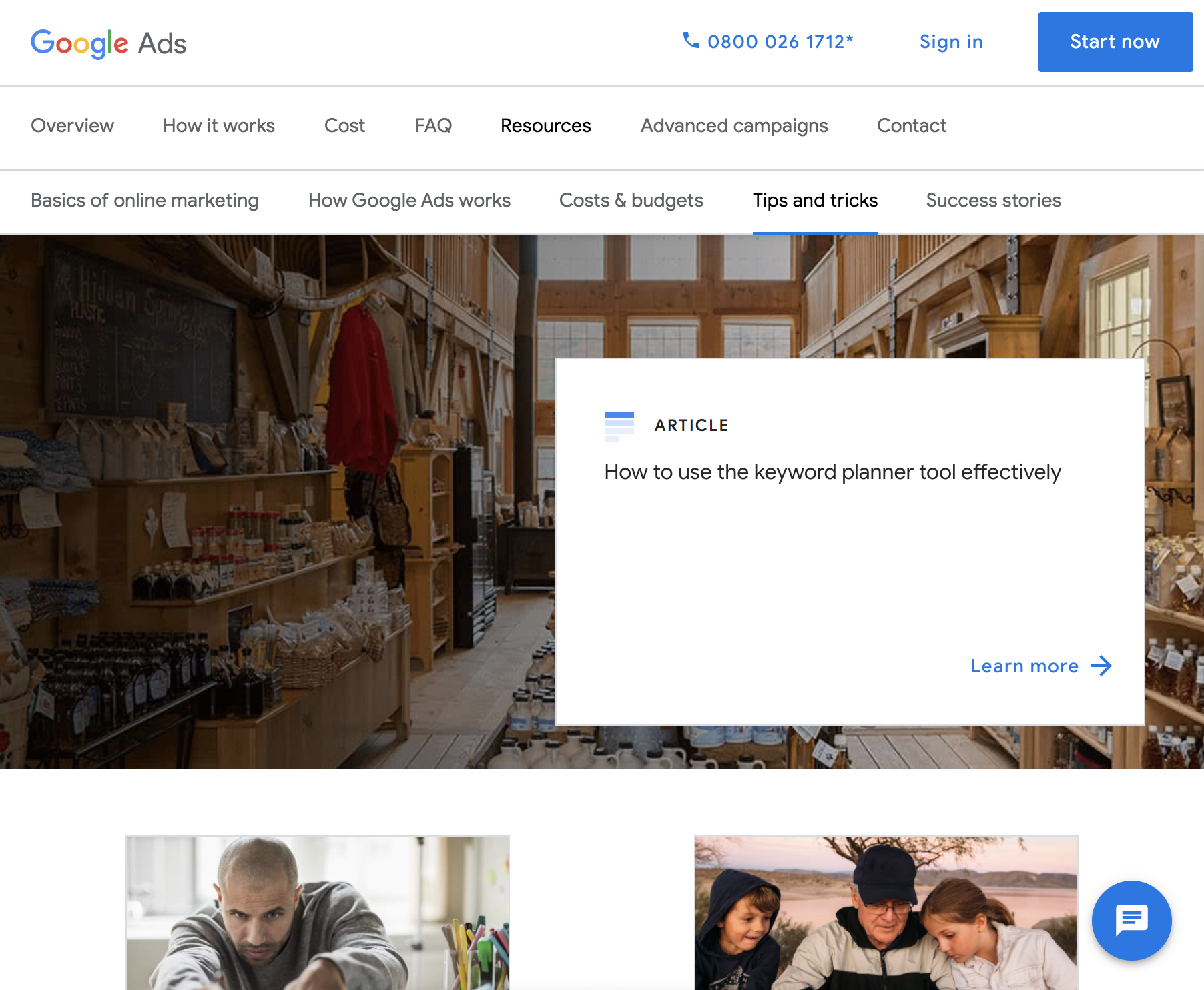 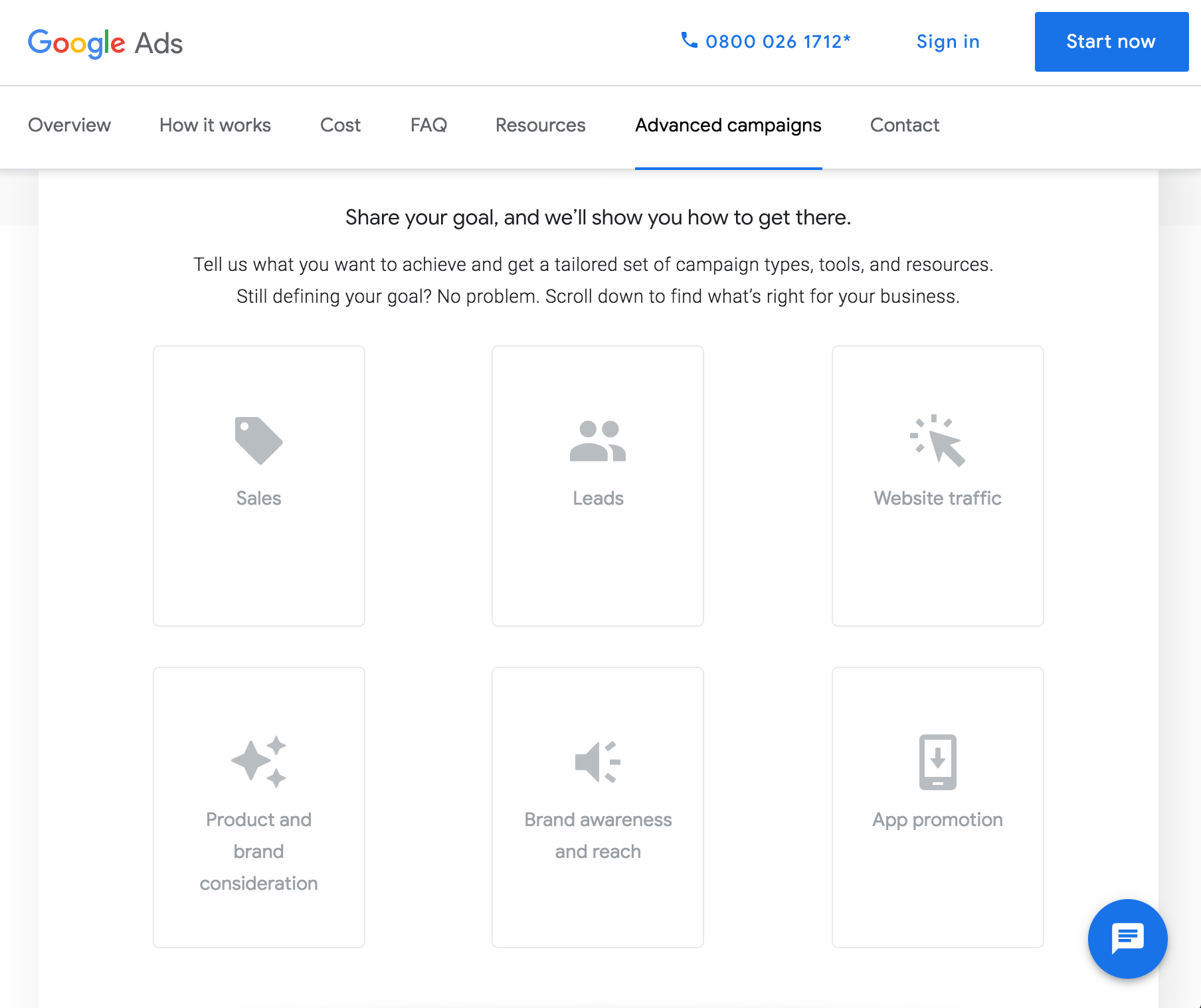 The final-click had long been a major focus for the team – undergoing constant tweaks & optimizations.

Nudging our customers to commit to Google Ads at the crucial moment in the decision-making process required several tasks & cues to take the next progressive step:

The vector-based Google identity had served well in the past – creating a more approachable appearance, however, it had become slightly stale, presenting several problems when considering social placements, and when addressing business-related topics.

The challenge was to still maintain a recognizably Google identity at such a hard-working layer in the comms model while still accurately depicting the product in such a short window of attention.

Revert to the Google mission – to organize the world’s information and make it universally accessible and useful.

Retracting the heaviness of the colour palette, becoming more disciplined in utilising white as the primary colour and the vibrant-Google-colours as secondary colours, and exploring more socially-native ways of representing the product allowed us to organise our visual language and making the information more instantly accessible for today’s 3-second rule of attention.

A more professional and humanized identity was necessary throughout the communication for consistency purposes, but also to future-proof ourselves. 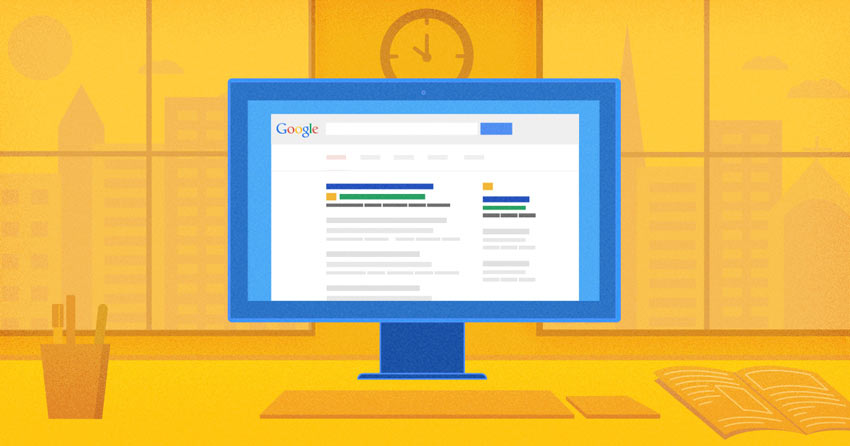 Navigating the Google purchase journey as a business-owner or inquisitive marketer would have produced variated communication based on your signals and business interests – something crucial to still maintain in the final touchpoints of the journey.

Depending on these signals, direct response ads would have variated, targeted messages based on your business profile (decisionmakers vs users etc) as well as business interests & goals.

Furthermore, prior signals and ad targeting & traffic would then be reflected again once on the Google landing page, and a modular management system allowed the hierarchy of information on the site to filter according to your profile & propensity score.

About a week ago

What’s the disorder called when you want salt & vinegar to destroy your taste buds forever?

The places I’ve been & I hear “agh no that’s lekker hey” from across the room. South Africans are like mushrooms 🍄

About a month ago

Trying to use Instagram or WhatsApp right now pic.twitter.com/Qkc8kJtKZo

Been on Twitter for 10 years today. Still shit at it 👍🏽

Me once hearing that all the yoga people go for br

He may be a phony, But he’s hung like a Shetland

This error message is only visible to WordPress admins


Error: API requests are being delayed for this account. New posts will not be retrieved.